Electrochemistry is a field of chemistry that deals with chemical phenomena involving electrons and ions. An electrochemical cell consists of two electrodes and an electrolyte that exists between the two electrodes. The reaction occurs at the interface between the electrode and the electrolyte, as shown in the figure. This electrochemical cell can be used to convert electrical and chemical energy with high efficiency. Electrochemical devices, such as lithium-ion secondary batteries and fuel cells, are expected to play a major role in solving environmental and energy problems in the future, such as power supplies for vehicles and other mobile media, and their use in the full-scale spread of smart grids. 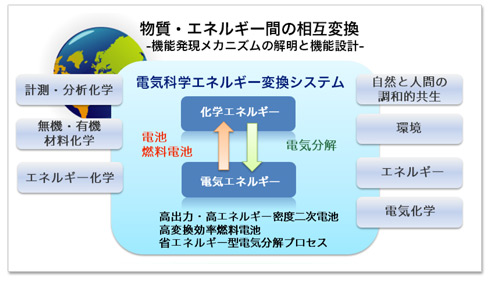 At present, further improvements are required for lithium-ion secondary batteries. We are developing lithium-rich cathode materials such as Li2MnO3 with the aim of increasing the capacity of the cathode. In the conventional positive electrode such as LiCoO2, the charge during charge / discharge is compensated by the transition metal, so the capacity was limited only for redox of transition metal. However, in the lithium-rich cathode material, unlike the conventional cathode materials, oxygen is responsible for charge compensation in addition to the transition metal, so a high capacity can be obtained. However, oxygen becomes unstable due to charge compensation, so controlling the electronic structure of oxygen is extremely important for repeated charge and discharge. In our research group, we will clarify the electronic structure change of oxygen during charge and discharge by utilizing operando analysis that combines electrochemical measurement and synchrotron radiation measurement as shown in the figure, and clarify the design guideline for high capacity positive electrode material.

In materials used in energy devices such as lithium-ion batteries, the phase transition pathways associated with compositional changes have a significant impact on the reaction rate. Therefore, it is important to elucidate the phase transition mechanism in order to improve the input-output properties of materials. Our laboratory has worked to elucidate the phase transition mechanism of LiFePO4, a typical cathode material, by utilizing electrochemical measurements and operand X-ray absorption spectroscopy and X-ray diffraction measurements (Chem. Mater., 2013, 25, 1032 – 1039, J. Am. Chem. Soc., 2013, 135, 5497 – 5500, Chem. Mater., 2017, 29, 7, 2855 – 2863, ACS Applied Energy Materials, 2018, 1, 6736 – 6740). For example, we have recently studied the dynamic behavior of the intermediate phase of LiFePO4 at high temperatures by operand X-ray diffraction using a molten salt electrolyte at 230°C, and found that a sequential phase transition proceeds through the intermediate phase as a single phase during charging, but the three phases coexist as a whole during discharge (Chem. Mater. 2019, 31, 18, 7160 – 7166). 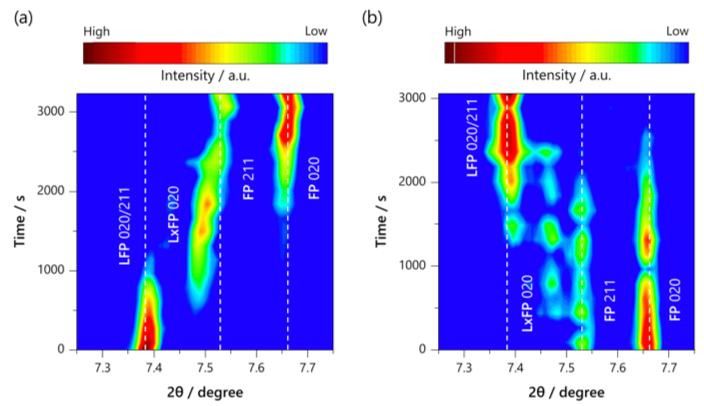 Electrode design for realization of all solid-state batteries

All-solid-state batteries, which are composed of all inorganic solid materials, are widely recognized as the ultimate battery without the risk of liquid leakage or ignition. But they can have some difficulties in contact between electrodes and electrolytes. In our group, in order to elucidate the cause of the reaction resistance at the electrode / solid electrolyte interface, we constructed a model interface of the positive electrode / sulfide solid electrolyte, and made full use of the electrochemical chemistry measurement and the angle-resolved XAFS method. We are clarifying that the reaction products formed at the interface and that the formation of reaction products can be suppressed by modifying the interface with a stable compound. Solid State Ionics 2018, 327, 150 – 156

In addition, we developed methods such as two-dimensional imaging X-ray absorption spectroscopy in order to visualize the reaction heterogeneity that occurs in the electrode mixture of all-solid-state batteries, and measured the in-plane and cross-sectional reaction distributions. The reaction proceeds uniformly at the electrode where the active material, conductive agent, and sulfide solid electrolyte are uniformly dispersed. In contrast, it is not uniform at the electrode where those materials are aggregated（J. Phys. Chem. C 2019, 123, 6, 3292 – 3298）。

Magnesium secondary batteries, which use magnesium metal as the anode, have a high theoretical capacity density, abundant resources, and a high level of safety. However, compared to the monovalent lithium ion, the divalent magnesium ion has a stronger interaction, is less likely to diffuse in the solid phase, and the electrode reaction is extremely slow. In addition, no magnesium electrolyte has been found that is capable of repeatedly dissolving and depositing magnesium metal for stable and safe charging and discharging. In other words, it was necessary to solve the problems of the cathode and electrolyte in order to create a magnesium secondary battery. Our group has reported MgMnSiO4 and MgFeSiO4 cathode materials that ensure the diffusion path of magnesium ions by precisely controlling the crystal structure of the cathode materials (Phys. Chem. Phys. 2016, 18, 13524 – 13529, Sci. Rep. 2014, 4, 5622). In addition, we were the first in the world to report a full-capacity magnesium secondary battery using MgFeSiO4 as the cathode and magnesium bistrifluoromethanesulfonimide (Mg(TFSI)2) and Triglyme as the electrolyte.

We are also working to elucidate the reaction mechanisms at the anode/electrolyte interface, finding, for example, that weakening the interaction between magnesium ions and anions is important to promote the Bi-metal anode interface reaction (J. Phys. Chem. C 2018, 122, 44, 25204 – 25210). In the Mg metal anode interfacial reaction, we have found that the weakening of the interaction between the magnesium ion and the anion and the suppression of the reductive decomposition of the anion are important factors for the reversible precipitation and dissolution of Mg by means of electrochemical measurements, Operand soft X-ray absorption spectroscopy, X-ray photoelectron spectroscopy, and first-principles calculations.（J. Phys. Chem. C 2018, 122, 44, 25204 – 25210）。

In order to design a high energy density secondary battery with high energy density, it is necessary to break away from the current topochemical reaction. By using the fluoride ion, which is a monovalent anion with a large diffusion coefficient in the solid, as a carrier, it becomes possible to utilize the redox of polyvalent cations, which is advantageous for increasing the energy density. We are developing such anion-driven all-solid-state battery. In recent years, we have particularly focused on the Ruddledsden-Popper type oxide, which is a perovskite-related structure, and are promoting the development of positive electrode materials for all-solid-state fluoride ion batteries using intercalation of fluoride ions and basic research using metal positive electrodes.

Study on safety of large lithium-ion battery for electric vehicle

The battery residual life evaluation technology, recycling technology, and safety evaluation technology become increasingly important with the widespread use of electric vehicles in society and the increasing energy densities and capacities of batteries. In our group, we focus on the technology of observing and recording the dynamic behavior inside the battery under the test environment. We currently focused on the high-energy X-ray imaging using synchrotron radiation under the safety test environment. We are developing a system for observing and recording the dynamic behavior of large lithium ions.

The polymer electrolyte fuel cell (PEFC) is expected to be widely used as a power source for automobiles and distributed power sources for household use as a clean power generation device. Currently, platinum-based catalysts are required on both anode and cathode electrodes to operate fuel cells. However, it is difficult to reduce the cost of fuel cells because platinum is the limited resources and an extra amount of catalyst is already installed in advance in anticipation of deterioration. To solve this problem, it is necessary to improve the activity of platinum itself while reducing the amount of platinum.

Our laboratory is now investigating the structure and electrochemical properties of core-shell catalysts. In particular, for structural analysis of the catalyst, we obtain structural data by X-ray Absorption Spectroscopy and X-ray total scattering measurement using the synchrotron radiation facility (SPring-8). We are also actively working on structural analysis of the catalyst under operating conditions (Operando), and we are clarifying the relationship between catalytic activity and structure.

・Study on specific adsorption of ionomer on platinum catalyst

・Correlation between ionomer structure and proton conductivity on various substrates

Since the redox reaction of cathode catalysts in a polymer electrolyte fuel cell occurs at the interface between the electrocatalyst and the ionomer (Nafion), it is necessary to understand the structure of the electrode/ionomer interface to design a highly active reaction field. It has been reported that the structure of Nafion on the electrocatalyst depends on the thickness of the Nafion film, the presence or absence of heat treatment, and the type of electrode, and that the proton conductivity of Nafion depends on the film thickness. In our laboratory, grazing incidence small-angle X-ray scattering (GISAXS) and wide-angle scattering (GIWAXD) have been used to elucidate the correlation between the structure and physical properties of ionomers on electrodes. For example, by analyzing the structure of Nafion thin films on Pt electrodes with different film thicknesses and annealing conditions, it was found that the hydrophilic and hydrophobic domains change significantly when annealed above the cluster transition temperature, resulting in a decrease in proton conductivity. 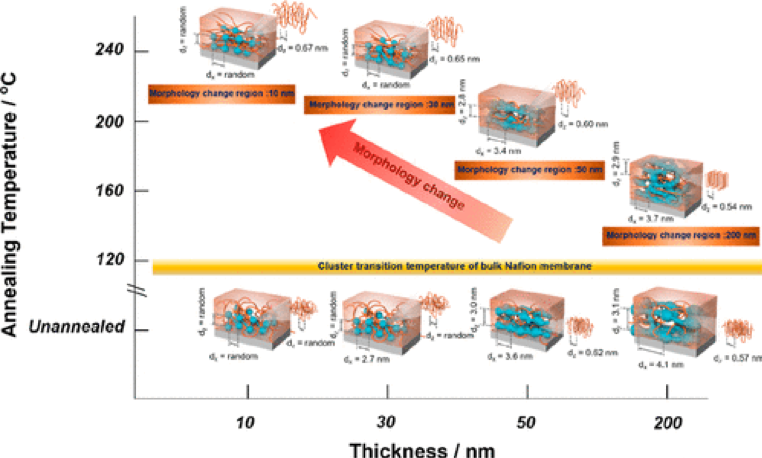 Since hydrogen is an energy source that is suitable for storage and transportation. There is a growing interest in hydrogen energy systems that use hydrogen as an energy carrier, such as fuel cells. Currently, hydrogen is mainly produced by steam reforming of fossil fuels and by-product gas of salt electrolysis industry, but from the viewpoint of global environmental protection and conservation, renewable energy such as solar panels and wind power is important as a power source.

Therefore, our laboratory is conducting the following research in order to find the factors for highly active catalyst.

We are also working on developing operando measurement technique for water electrolysis catalysts. Bubbles generated during water electrolysis obstruct the optical path of X-rays which makes catalyst analysis difficult. Therefore, we have developed a cell that can perform X-ray absorption spectroscopy while continuously removing bubbles.